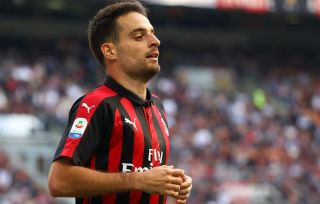 Midfielder Giacomo Bonaventura has reflected on the time he spent at AC Milan ahead of facing his former club with the Fiorentina shirt tonight.

Bonaventura said goodbye to the Rossoneri in the summer of 2020 after six seasons, with 183 official appearances and 35 goals. The 30-year-old came off the bench during a 3-0 win over Cagliari at San Siro to end the campaign, and with his deal having expired he decided to join Fiorentina on a free transfer.

It was certainly not a farewell without emotion as Bonaventura’s tears on the pitch at San Siro struck a chord with his team-mates, but he then repeated that in the dressing room in front of his companions, who were also moved.

Now, though, he must face Milan again. A few hours before the match between La Viola and the Rossoneri at the Stadio Artemio Franchi he talked about his time at San Siro.

“It was a magical and intense six years. I am happy with what I did at Milan and with the relationship I still have with the fans, who appreciated my way of being and doing. I gave everything to Milan, I never spared myself,” he told DAZN (via MilanLive).