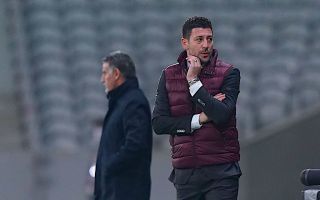 Daniele Bonera praised the fight that Milan showed in their draw with Lille, stating that the only pity was that they were unable to get the three points.

Milan could have taken a big step towards qualification for the knockout stages and taken top spot back with a win, but they surrendered a lead to draw 1-1.

After a cagey opening 45 minutes it was Samu Castillejo who gave Milan the lead early in the second halfwith a close range finish after an incredibly swift and incisive counter.

However it would not be enough to secure three points and move back above the Ligue 1 side as Jonathan Bamba netted an equaliser following some defensive confusion to earn Les Dogues a draw.

Sparta Praha’s thumping win over Celtic it means Milan are currently just a point clear of the Czech side – who are third in the group – ahead of Celtic’s visit in a week’s time.

Bonera spoke to Sky Italia after the game, with his comments transcribed by MilanNews and translated below.

“We had a very good game, we got distracted in that situation, it’s a shame because the team kept the ball in the game, far from the Milan we saw in the first game,” he began.

“Our identity? Team spirit, the participation of everyone, we are happy with the work of the boys, a pity only for the result.

“We have to win the next games and we think we can do it by playing like tonight.”

Tonali was handed another start with some saying that he has been shaky with some bright sparks since arriving at Milan, and he had a hand in the opening goal with a beautiful through ball.

“He is part of a journey, we have faith in the boy, today he was decisive. He is a serious and intelligent player, we are very happy with him.”

On Maradona’s passing: “We heard the news as soon as we landed, I join in the condolences, I offer condolences to the family. We are all united, he was a great champion.”

On the very low average age: “We are happy we are young and exuberant guys, sometimes a bit of healthy madness is needed. It is a young Milan with some elements of experience like Kjaer who is giving us a very big hand. We are happy to have such a young team.”

Milan felt the absence of Ibrahimovic in some of their attempted hold-up play, but Bonera believes the team showed good spirit.

“He is too important a player, the group has always made up for his lack. The team spirit will always be the same, with or without Ibra.”

On Bennacer: “He is giving a lot, he has grown a lot. I would not dwell on individuals, this team needs everyone, we are confident and we look to the future.”