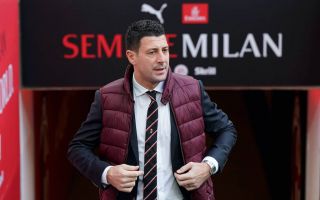 Daniele Bonera praised his side for their performance in Sunday’s 2-0 win over Fiorentina but stopped short of saying they are ready for a title push.

Milan were able to extend their unbeaten league run to 21 games and also their lead atop the Serie A table to five points for the time being with a comfortable victory on Sunday afternoon.

Alessio Romagnoli got the opener inside the first 20 minutes and Franck Kessie doubled the advantage from the penalty spot, but missed a spot kick to make it 3-0.

In the end that would be inconsequential as Milan held on for another big three points. Bonera was interviewed by DAZN at the end of the game, with his comments transcribed by MilanNews.

What do you see in this Milan? “I see another small piece to put into this great puzzle that started some time ago. We knew we would have difficulties but we acted and reacted like a great team, which we are.”

A number of players were seen greeting head coach Stefano Pioli via video call on the pitch after the game.

“It’s a healthy group with values. We made the video call in the locker room. The Coach is in fact always with us at Milanello,” Bonera said.

Romagnoli has come under fire in recent weeks for his shaky performances, but the captain responded with an exceptional display and was even awarded Man of the Match in our player ratings.

“I missed the celebration but I enjoyed the goal. I tried to give directions to the back line immediately. We are happy with the result and the performance and the spirit, as has been happening for some time now.”

On Kessie: “We know Franck’s importance, he shows it from many games. He’s too important in terms of quality, we thought he was a strong player but he also improved in ball management situations. Continuous growth.”

On Calhanoglu: “There are times when you kick twice and score three goals, but tonight he hit the post. The contribution that Calha gives goes beyond the normal. An incredible game and he is always positive, we are satisfied with his performance.”

On Calabria and Kjaer: “Davide has had growth in terms of personality. Simon knew that this team needed his great experience. He is a reliable player, a true leader and a true man.”

On Donnarumma: “They are different players, the champions make these performances. Gigio is always there and he proved it even today.”

How does it feel to be on the bench? “I am very happy and satisfied, this team has a great coach called Pioli. We are eager to see him again at Milanello.”

Similarities with the last Milan side that won the Scudetto: “We have grown in self-esteem thanks to daily work and the pleasure of suffering and working together with Milanello. This links us to that Milan.”