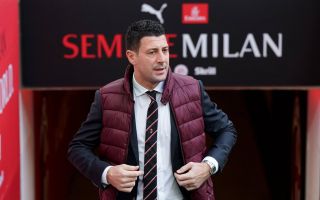 As Stefano Pioli tested negative for COVID-19 just before the Celtic clash, Daniele Bonera was no longer needed as the head coach. The former Milan defender, of course, returned to his usual tasks within the staff.

In charge of three games, Bonera enjoyed two wins and one draw including a rare win at Napoli. Although he did a fantastic job with the players, he was of course in constant contact with Pioli and assistant manager Giacomo Murelli.

In an interview with Radio 105 (via MilanNews), during the broadcast ‘105 Mi Casa’ conducted by Max Brigante, Bonera spoke about his experience as the temporary head coach. He revealed that it was a special feeling indeed.

Did someone tell you ‘stay calm’?

Is the emotion of coaching different from the one you feel as a player?

“Absolutely yes, up until that day I lived in a more detached way, not being the first responsible. Being there gives you a great emotion and adrenaline. Different from that of a football player but also similar.”

How is work during the week?

“The most important phase is that which concerns the preparation. I have to thank the club for providing the technological possibility to always be in contact with the coach. Pioli is a coach who likes to share, he wanted to understand what my reactions and those of the players were. He was always present.”

How was the video call at the end of the match with Pioli?

“A beautiful moment, we continued in the locker room. It’s a real group of real men and special guys. I took the liberty of having a little meeting before Fiorentina where I said I felt lucky to be there at the head of those special guys. I told them to take the field and face the match as we had always done until then.”

A Milan that surprises, what are the ingredients that led to this success?

“It would be a very long list. At the base, there is the skill and preparation of a great coach and a great man like Mr Pioli, he has entered the minds and hearts of the players. It’s a path that starts from afar, every game we have the opportunity to continue to confirm ourselves but if we let our guard down, we become a normal team. Daily work is the basis of these results.”

During today’s training session, as became clear by the photos Milan published, Milanello was covered in snow and the players had a bit of fun with it. Bonera commented on this and jokingly replied to the question.

“Today at Milanello, we did snowballs rather than training (laughs). It was a different day than usual, but tomorrow we will have time to better prepare for the match against Sampdoria.”

READ MORE: Highlights of Hauge, Romagnoli and Donnarumma vs. Celtic plus three others