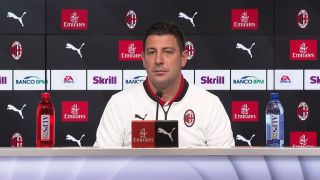 On the eve of the clash against Fiorentina, Daniele Bonera spoke to the media at the usual press conference earlier this afternoon. Having beaten Napoli last time out, the Rossoneri will be looking for another three points.

Stefano Pioli, just like his assistant, is still COVID-19 and this means that Bonera will be on the bench for the third consecutive game. With one win and one draw in the bag thus far, Milan certainly haven’t declined since Pioli tested positive.

During the press conference, as cited by MilanNews.it, the 39-year-old was asked about tomorrow’s game and the communication with the manager. Of course, he also touched on many other topics, answering the journalists’ questions.

“Fiorentina have gone through a tough moment but we know the value they have.”

Gabbia did well in Romagnoli’s place…

“We made a good defensive performance, we apply the concepts to all the players. Unfortunately, we made that small mistake but we are happy with everyone.”

Have you found certainties this week?

“Verona didn’t cancel the certainties, we needed to rest after a long period of matches. We resumed the journey where we left it, but also with Verona we played a very good game, we analyzed it. The boys know what to do for stay high, we have the awareness of being strong.”

What is the condition of Ibrahimovic?

“He will be evaluated next week, he’s in a good mood, he makes us hope for a return as soon as possible.”

“It’s part of every player to have more or less positive moments, the contribution he gives us on the pitch is precious, we trust a lot in him, beyond the numbers. We are happy with his work.”

“It’s a bit like Bennacer’s path last year, he’s growing, we talk often, we rely on it a lot, on Thursday he was the protagonist of the pass for Rebic. He has everything to improve himself day by day, we are here to make him become a permanent player of this team.”

How long does Rebic need to get back to full fitness?

“The elbow affected him and he’s not yet at 100%, even for his way of playing he’s a bit blocked. We reviewed the game and made some considerations with him, as soon as he returns to 100% his characteristics will come out again, but we have already seen with Lille.”

Could Diaz play from the start tomorrow?

“We are really happy with this squad, Brahim has entered well, he has great technique, he has a great vision of the game, he could start from the beginning.”

Can you already think about a career as a head coach?

“I’m waiting for our coach, we hope he will come back soon. I still need some practice, the advice and what I’m learning from Pioli I will keep them tight.”

“Alessio was available against Lille, we also made a choice based on the many games. He had played all the games.”

How is Leao’s recovery going?

“He had a check-up this morning, it went pretty well, the doctors are happy with the progress, he will have a new check-up mid-next week.”

Can Milan stay at the top for long?

Do you see any similarities with the old Milan?

“We won in Naples, it’s something that binds the two AC Milans. We have a great spirit, it was recognized at the time. I noticed that there is a great desire to stay at Milanello, work, sacrifice each other. I have to to say that the similarities are there.”

“Sometimes we ask him to be further up or not, but he plays games well in both ways. He is a strong player, he has all the qualities to stay back and defend.”

On the right, there is always the Saelemaekers-Castillejo battle…

“We are calm and satisfied with the work of both, Samu made a good match crowned by the goal. We have a great application from both, Alexis has made great improvements, we are calm.”

Missing the victory at San Siro?

“Tomorrow will be a tough match, Fiorentina are a strong team, we know it well, maximum respect but we are aware that to continue our journey tomorrow we have a good opportunity, also to win at home.”

The clash against Fiorentina is scheduled for 15:00 CET and since 12 points separate the two clubs, Milan are clear favourites to win. The away side, though, will be hungry to change their negative moment and the Rossoneri need to be careful.