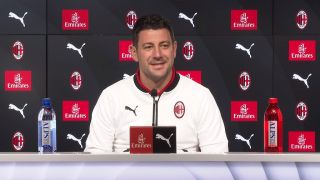 Bonera reveals strategy for communicating with Pioli during Napoli-Milan clash

As Stefano Pioli, along with his assistant Giacomo Murelli, has tested positive for COVID-19, Daniele Bonera will lead Milan against Napoli tomorrow. The staff member and former player was in charge of training this week.

The 39-year-old spoke to the media during the usual press conference earlier today, revealing that it’s a special situation indeed. However, given that he is a member of Pioli’s usual staff, there shouldn’t be a big difference.

During the presser, as cited by MilanNews.it, Bonera was asked if there is any strategy to communicate with Pioli during the game. Although it’s possible if necessary, it seems the former defender will be given free rein to lead the team.

“If I will communicate with Pioli? We talked to the coach about it, but we believe it can create confusion. We thought about having a pre-match meeting, then if there are important things we will check at the end of the first half,” he stated.

The game is scheduled for 20:45 CET and since Napoli are just three points behind, it will be important for Milan to at least get a draw tomorrow. It will be a tough game, though, so the Rossoneri will have to stay focused.

READ MORE: Milan have the best-built team in Serie A – Maldini and Massara’s strategy crucial