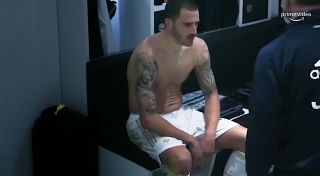 Watch: Bonucci enraged during Juve’s 3-0 defeat to Milan – “Do we have to be afraid of Milan?”

Juventus defender Leonardo Bonucci suggested that AC Milan are nothing to be afraid of at half-time during their 3-0 defeat last season.

During the seventh episode of the All or Nothing series about Juventus on Amazon Prime Video, Bonucci spoke to the team during half-time of the game in May 2021. The Juventus defender and former Milan captain addressed the team and certainly didn’t give the Rossoneri much credit.

“But let’s look at this f**king blackboard [pointing at the Milan team] – do we have to be afraid of Milan? We have to play with our heads free, it’s a difficult moment,” he said (via MilanNews).

In truth it was a victory that Stefano Pioli’s men deserved as they seemed in control from start to finish, taking the lead through Brahim Diaz as the Spaniard netted with an excellent finish into the top corner. Milan would net twice more inside the final 15 minutes too, with substitute Ante Rebic also thumping an effort into the top right corner and Fikayo Tomori scoring his first for the club.

The win not only meant that Milan went back into the top four, but by virtue of the aggregate score over the two games (4-3), they also had the head-to-head advantage over the Bianconeri.

READ MORE: Maldini, Massara and Pioli all believe in Messias – the full details of the deal with Crotone