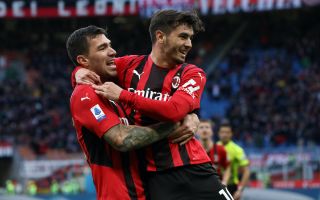 Brahim Diaz insists he doesn’t care about No.10 ‘pressure’ and reveals a weakness he works on with Ibrahimovic

Brahim Diaz has given some insight into life on and off the field including his friendships within the Milan squad and his favourite career moments so far.

The Spaniard joined Milan in the summer of 2020 on an initial one-year loan deal from Real Madrid and became a real key contributor towards the business end of the season, scoring important goals such as the one to take the lead in the decisive 3-0 victory over Juventus.

His end to the season meant Milan wanted him back and they secured his return on a two-year loan from Los Blancos, though this time there is an option to buy in favour of the Rossoneri and a buy-back in favour of the LaLiga giants, as per multiple reports.

On the day of the Rossoneri’s trip to face Genoa at the Marassi, Brahim Diaz gave an interview to DAZN during which he spoke a bit more about the dynamic of the dressing room, with MilanNews relaying his comments.

On his favoured foot: “I play with both, when I have the ball in possession I prefer left, when I have to shoot the right. So if I really have to choose I say the right because I use it to kick, even if when I dribble I use more the left. I’ve always played with both feet.”

On jersey number 10: “I like to have responsibilities, I’m a guy with personality, I don’t care about the pressure of wearing this number. I just think about playing like I’ve always done.”

On what he needs to improve: “In shooting from outside the area. I often stop after training to shoot, I also challenge myself with Ibrahimovic.”

On Ibrahimovic: “He is the same age as my dad. He is like Benjamin Button, he can still play for many years. He still makes a difference. What advice does he give me? He tells me to do what I can do, I have great talent and I have to help the team.”

On Theo Hernandez: “We are good friends, even with Castillejo. We do a lot of things off the pitch too. Every now and then he comes to my house, every now and then I go to him. Theo is good at cooking.”

On the most beautiful stadium in which he has played: “Wembley.”

On the music he listens to: “Flamenco and reggae.”

On the team-mate who dresses the worst: “Theo”.

On the sport that follows in addition to football: “I only follow football.”

On the defender he would like to face: “Sergio Ramos who was also my team-mate. I trained with him, I know how he likes to play. He is an extraordinary defender.”

On the funniest team-mate: “Castillejo.”

On the most beautiful game in his career: “I don’t know, for me all the games I play are beautiful.”

READ MORE: Ibrahimovic reveals how he set about changing Milan upon return: “Nobody ran in training”