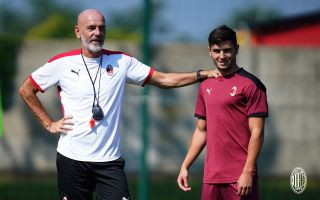 AC Milan playmaker Brahim Diaz has revealed that the Scudetto is the team’s aim and had plenty of praise for head coach Stefano Pioli.

The attacking midfielder arrived last summer on an initial season long loan from Real Madrid and although he struggled to break through at first, his contributions towards the end of the season were vital and this persuaded Milan to extend his contract by two more years.

He has already made some vital contributions this season too, with four goals in all competitions already which have directly led to 9 points as three of them were game winners.

Brahim gave an interview to the Spanish outlet Radio Marca and starting by talking about his current situation and tactical position in the Milan side, with his comments transcribed by MilanNews and translated below.

“I’m doing what I like best: playing football and having fun on the pitch. When you have continuity you feel safer, even physically you are better,” he said.

“I am trying to reach much more in the box and the goals and assists are increasing. I feel more comfortable because I see more spaces, playing with both feet allows me to get out on both sides. I like to have the ball at my feet, to aim the opponent and create danger.”

Brahim Diaz is known for his ability to use both feet when it comes to shooting but especially when it comes to changing direction and causing problems with his dribbling, and the 22-year-old insists it is just natural to him.

“I think it’s innate, I just remember that at 4-5 I like to have the ball on my feet and play alone, I needed a ball just for me. Even my parents tell me that is innate as a thing,” he said.

“I remember that as a child I had a coach who made us wear two socks, one white which indicated the good foot, and one black, which indicated the weak foot. When he said to play with the black socks, however, he saw that for me it was the same thing.”

Brahim was asked about the impact that head coach Stefano Pioli has had on his development since he arrived on that initial loan spell, with nothing but praise coming in reply.

“He made me grow, he helped me a lot for my way of playing. His spirit in the dressing room, his passion for football and the way he sees the game, goes very well with the players he has. I can only say good words about him.

“We are a very compact squad, the group is very good. We like to attack the goal quickly and keep the ball. The Scudetto is a target, we are Milan.”

On Ibrahimovic, he added: “He was the first one I met in the Milan dressing room. He is a leader on and off the pitch and my relationship with him is very good. He loves my football.”