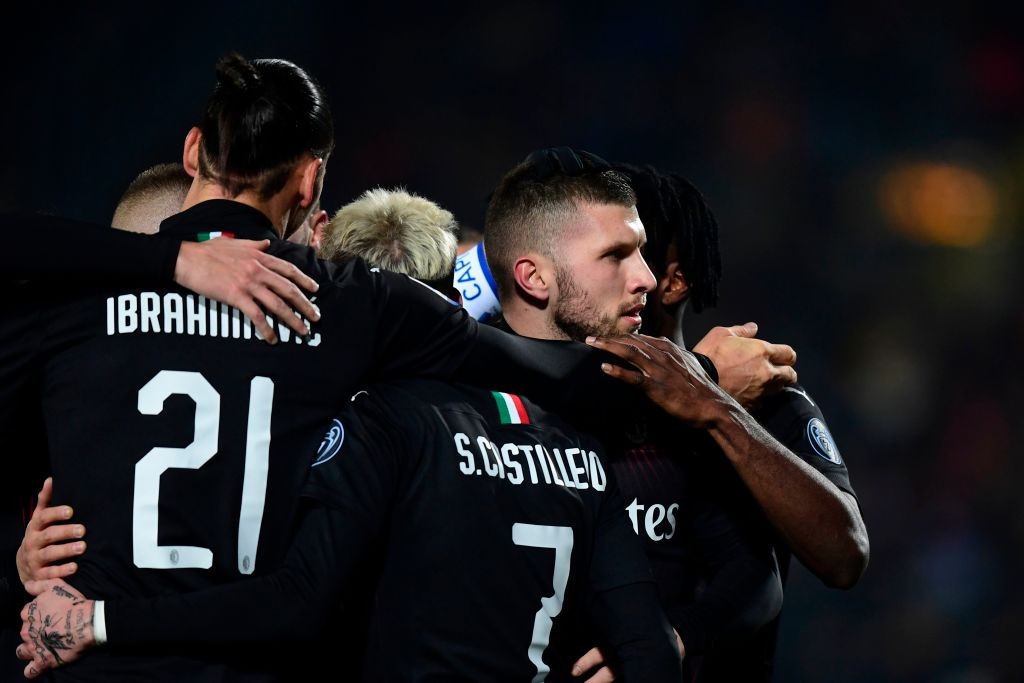 Brescia 0-1 Milan: Rebic the hero once again as Rossoneri move into European spots

AC Milan made it four wins in a row in all competitions and moved into the top six spots after a narrow 1-0 win over Brescia on Friday night.

The Rossoneri found it hard work against Serie A’s second bottom side at the Stadio Rigamonti, with the hosts coming close on a number of occasions, particularly in the opening stages of the second half.

However, Ante Rebic was once again the hero off the bench as he pounced fastest to thump home a loose ball inside the Brescia area and make it three goals in his last two games.

The result moves Milan temporarily into the top six, though they could remain there if Cagliari fail to beat Inter.

Stefano Pioli made one change to the team that beat Udinese on Sunday as Hakan Calhanoglu – back from a muscle injury – replaced Giacomo Bonaventura on the left side of the midfield.

There was frantic action early on as Milan saw penalty appeals in the second minute waved away after Zlatan Ibrahimovic’s shot was blocked, while Simon Kjaer was booked for a foul on Ernesto Torregrossa on the counter-attack.

After a scrappy opening exchange it was Milan who carved through their opponent first. A lovely exchange involving Bennacer and Ibrahimovic ended with the former through on goal, but he couldn’t control the loose ball and dribbled it out for a goal kick.

The Algerian once again caused the opposition trouble minutes later when he hit a loose ball on the half-volley towards the near post, but as the net rippled it became apparent it had gone just the wrong side.

Ibrahimovic had his first attempt not long before the 20 minutes mark, rising highest to nod a Leao cross towards the top corner that was desperately clawed away.

Jesse Joronen in the Brescia goal was called into action again as Kjaer directed a free-kick towards goal, but it was a comfortable save when the Dane could have done better.

The home side had a huge chance to take the lead in the 33rd minute when Franck Kessie lost his man Torregrossa who fortunately headed wide from a corner. Moments later, Donnarumma saved well at his near post from an Ayu header as the Biancoazzurri began to grow into the game.

Milan should have taken the lead five minutes before the break as Theo Hernandez provided Ibrahimovic with a golden chance to slot home from six yards, however the Swede inexplicably fired wide first time.

Brescia had a huge opportunity to break the deadlock minutes into the second half as a knockdown found Torregrossa on the edge of the six yard box, however he couldn’t direct his acrobatic effort towards goal as the ball went narrowly wide.

The hosts continued their pressure and forced Donnarumma into a good near post save to deny Bisoli’s shot from a gorgeous Tonali feed over the top. From the resulting clearance, Torregrossa directed a shot inside the far corner but was rightly flagged offside.

Milan’s porous defence continued to allow chances and Donnarumma was called into action to deny Torregrossa on two occasions; both shots from around 20 yards heading for the near post, the latter more dangerous.

Ante Rebic came on for Rafael Leao in the first change enforced by Pioli, while Bennacer went into the book for the 10th time this season meaning he will miss the game against Hellas Verona.

Hakan Calhanoglu – despite having been anonymous for large parts of the game like his wing partner Castillejo – almost opened the scoring with an effort from distance that whizzed past the far right post.

Just inside the final minutes, Milan took the lead somewhat against the run of play. A peach of a ball found Ibrahimovic around the back and his drilled low cross ricocheted around inside the area before Rebic eventually fired home from close range to make it three goals in two games.

Just after Donnarumma saved an effort from Ndoj to remind Milan of their defensive responsibilities, Calhanoglu made way for Rade Krunic in Pioli’s second substitution.

Milan thought they had an all-important second goal seven minutes from time when a loose ball fell to Castillejo who fired into the roof of the net, though the offside flag was rightly up against Ibrahimovic who was involved in the build up.

Theo Hernandez so nearly moved onto seven for the season in all competitions when he ran a ball 70 yards from inside his own half, ignoring the wide open Rebic before rattling the crossbar with a fierce effort from just inside the area.

In the end it wasn’t to matter as Milan saw out the remaining three minutes of added time with relative ease to secure the perfect start to the weekend.