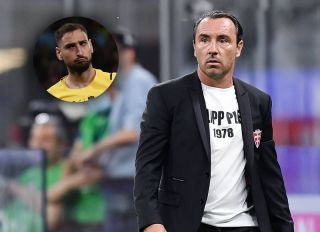 Brocchi on Donnarumma’s decision to leave: “It hurt me as well as the Milan fans”

Although the negotiations were always a struggle, it still came as a bit of a surprise when Gigio Donnarumma decided not to renew with Milan. As has been confirmed, he will continue his career with Paris Saint-Germain.

The goalkeeper is considered one of the best in the world and his departure is obviously a blow for Milan, given that he left free. On the other hand, his salary demands were way too high and he would’ve cost more than Mike Maignan in the end.

Former Rossoneri player and manager Christian Brocchi was interviewed by Tuttosport, as cited by MilanLive, and he shared his thoughts on the No.99 leaving. In what was a very honest response, he stated that the exit hurt him.

“If I expected Donnarumma’s decision? Honestly no. It was a choice that hurt me as well as the Milan fans. Personally, I consider Milan a family and I would have liked to see Gigio with the Rossoneri colours throughout his career. But I can’t judge him in a negative way because I know he always gave 110% for that jersey,” he stated.

As mentioned, taking the transfer fee and salary into account, signing Maignan actually cost Milan less than what it would’ve cost to keep Donnarumma. In that sense, the management made the right decision.