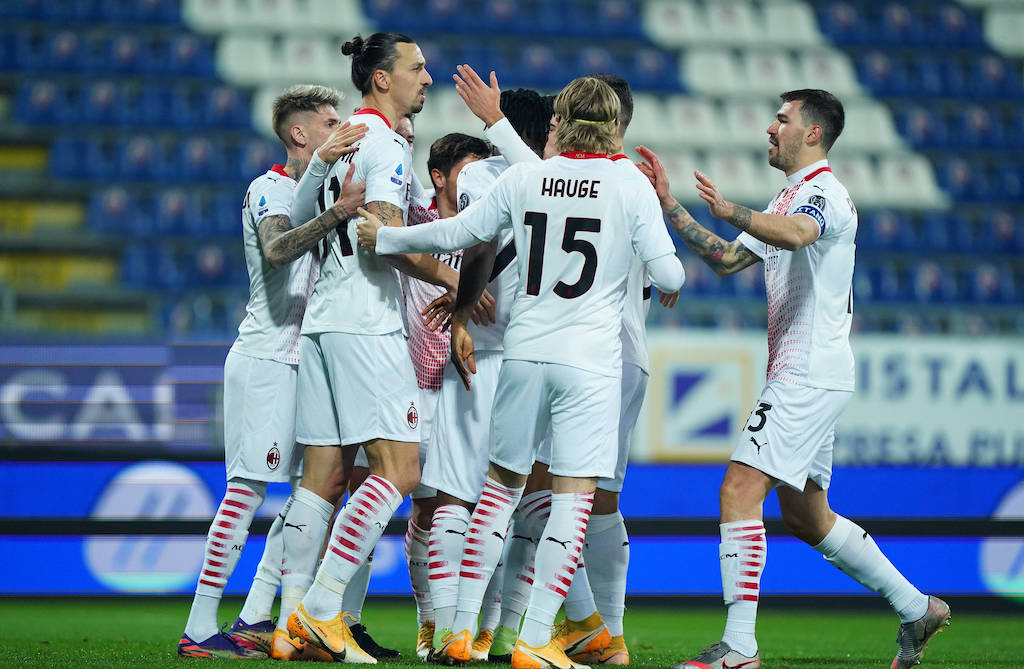 AC Milan restored their lead atop the Serie A table to three points with a 2-0 win over Cagliari in Sardinia on Monday night.

Perhaps as we should have expected it was Zlatan Ibrahimovic who had the decisive say in the game as he scored either side of the interval to ensure that the Rossoneri will be top at the half way point of the season.

His first came from the penalty spot after he had been bundled over, and the second was a delightful spinning finish after an exceptional through ball from Davide Calabria.

In racking up their 16th consecutive away game in Serie A without defeat, the Diavolo also responded perfectly to Inter’s win over Juventus last night, restoring the lead at the top back to three points.

Once again Milan went into the game with several selection issues, as Rafael Leao was suspended, Matteo Gabbia and Ismael Bennacer injured, plus the quartet of Rade Krunic, Ante Rebic, Hakan Calhanoglu and Theo Hernandez all having Coronavirus.

That meant Brahim Diaz came in as the playmaker and Diogo Dalot as the left-back, while Zlatan Ibrahimovic was given his first Serie A start since November, with Jens Petter Hauge on the left wing and Samu Castillejo on the right.

Milan were awarded their 12th penalty kick of the season in just the sixth minute as Ibrahimovic was bundled over by Lykogiannis having been put through on goal. It might have been expected that Kessie would take on the responsibility from 12 yards, but the Swede dusted himself down and sent Cragno the wrong way with a composed penalty to make it 1-0.

The Rossoneri then very quickly began to try and assert themselves in the game by playing in transition, and Castillejo wasn’t far off finding Ibrahimovic with a pass across the box just moments after the opening goal in what would surely have been a tap-in to make it two.

Cagliari then started to impose themselves in Milan’s third, and a cross from the left caused momentary confusion in the box as it fell between the defence and Donnarumma but the header by Simeone thankfully had minimal contact.

In the 25th minute Cragno was drawn into his first actual save of the game as Davide Calabria let fly from around 20 yards, though he was equal to the effort at full stretch tipping it for a corner, from which a pinball ensued but nobody could turn the ball goalbound.

Milan came close just after the half-hour mark as Kessie sprayed a ball out to Castillejo wide on the right and the Spaniard found Ibrahimovic at the back post, though his knock down into a dangerous area – with Brahim lurking – was scrambled away.

There was a half-chance for Cagliari not long after as the hosts got more of a foothold in the game looking to exploit balls into the box from wide areas, but it was a corner that saw Ceppitelli head over from the edge of the six-yard box.

Milan were inches away from doubling their advantage nine minutes before the break when Kessie found Calabria inside the area and the full-back – as he did in the midweek game – hit the post with a low effort towards the bottom-right corner.

Cagliari remained dangerous and came close with Joao Pedro, who flicked goalwards from the heart of the Rossoneri box but glanced his effort wide.

There was a sour moment a few minutes before the interval when Romagnoli went into the book for a late impediment meaning he will miss the game against Atalanta having accumulated too many yellow cards.

Pioli made an interesting change at the break as Kjaer made way for Pierre Kalulu, with several journalists reporting that the Dane was suffering from lower back pain.

Ibrahimovic had his second of the game just half a dozen minutes into the second half as he swept the ball into the far corner on the half-volley after a great ball over the top from Calabria, though the whistle went for offside. However, around 30 seconds later the VAR gesture was made and the referee pointed to the centre circle to confirm he was onside and the goal would stand.

👏 The ball from Calabria
🔥 The finish from Zlatanpic.twitter.com/KAW1kfeBu2

Donnarumma was a virtual spectator up until just after the hour mark, but he was forced into a smart reaction save to deny Simeone who had been put through on goal, though the Italian stood tall and blocked well from close range.

Ibrahimovic should have completed his hat-trick up the other end moments later as Milan countered and Hauge put the 39-year-old through on goal, though Cragno responded well with a save similar to the one Gigio made up the other end.

It would be Hauge’s last contribution as Alexis Saelemaekers then came on for the final 20 minutes in place of the Norwegian. Not long after Soualiho Meite made his debut for Milan as Tonali made way for the Frenchman.

Saelemaekers’ evening would go from bad to worse after his booking, with the Belgian adjudged to have hauled down his man and being awarded a second yellow card, receiving his marching orders less than nine minutes after coming on.

Cagliari had big shouts for a penalty inside the final eight minutes as Sottil went down under pressure from Brahim Diaz, but even after a VAR check it was adjudged that the Spaniard had not committed an infringement. In the aftermath, Donnarumma made an excellent one-handed save to deny a header from Cerri at the back post.

The hosts’ final chance of the game came as Ceppitelli flashed a header from a free-kick narrowly wide, and at the other end Ibra almost manufactured his third of the night after turning well but his effort was blocked for a corner.

The Rossoneri would not hang on despite the man disadvantage but rather coast through in the end for a vital three points.