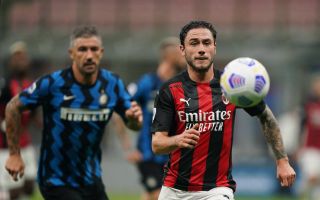 Calabria discusses how he plays his role, Milan’s current moment and the death of Kobe Bryant

AC Milan full-back Davide Calabria spoke about a number of topics during during “AC Milan Talk” on the club’s official Twitch channel.

Calabria’s resurgence since lockdown earlier last year has been well documented as the Rossoneri full-back shook off what seemed like an inevitable summer sale after a difficult period to seize the starting spot and become on of the best full-backs Italy has.

Below are the statements of the Rossoneri full-back, who becomes the first player in Italy to be guest on an official channel of a club on the well-known streaming platform, as per MilanNews.

On the compliments of Vieri, Cassano and Adani: “I didn’t hear them but they told me about it. It’s nice, they were great players. Even if we are only at the beginning, there is still a lot of work to do.”

How do you play your role? “I think the world of football has evolved, inspired by Guardiola’s Barcelona. There is a tactic but then in the action the role is indifferent. Even if you are a full-back, if you are forward you start as if you were a forward. Of course, then you must have discipline. The evolution of football from an athletic point of view, everything is faster, has led to this interpretation here.”

On his toughest opponent: “As a team there are many. It’s a good league, there are many teams within a few points. A game can change several positions. As a single there are so many, I can’t say just one. There are many strong players in Serie A.”

On how good Milan are: “It is very nice, we are a good team, there is a spirit of sacrifice even in difficult moments. It is no coincidence that we have been doing well for more than a year, everyone wants to prove their worth. We are only at the beginning, there is still a lot to work on. We are happy but we are at the beginning.”

Who have you connected with the most this year? “This year Daniel Maldini, he went up this year. I knew him before. I say him because he is now in the first team.”

The satisfaction of seeing hard work bear fruit: “Every week the page turns, you always have to think about the next game. It is obvious that when you do well there is satisfaction.”

On the new signing Tomori: “I did not know him. He is a good player, has a good personality, comes from a great team. He’s very aggressive and that’s great for the way we play, he can make us comfortable. He played an excellent match against Bologna.”

On the promise he made to friends: “We went to dinner this summer, we ate a lot of oysters. If we win the league we have to go to the restaurant and I have to buy him the oyster dinner (laughs).”

The player he was inspired by: “I grew up with Milan, there was Maldini. As a player I have not followed one in particular. I don’t believe in this much, everyone is unique. As a man and as a person and as a team, Maldini’s Milan was my point of reference. As a Milan fan I couldn’t help but follow them. It was a group of champions.”

On what he does before games to focus: “I listen to my own playlist, there are many genres. I focus on listening to the music and imagining the possible actions of the game. We work a lot on the video.”

Will he dedicate his next goal celebration to Twitch? “Absolutely yes, hopefully already on Sunday. I could take off the shirt that I am wary of (laughs). We will come up with something. Maybe I’ll do the Twitch T!”

Do you listen to Leao’s album? “I haven’t heard it yet but it’s on schedule, it’s not the kind I listen to before the game but I could put it on the home-to-Milanello journey (laughs).”

A thought about Kobe: “His disappearance touched me a lot. I was having dinner with my girlfriend, we had to leave because I felt like crying. Watching the videos I cried two or three days in a row. I was fond of him, then he was tied to Italy.

“In the negative I tried to bring out the positive by trying to imitate him by taking his mania in work. The “Mamba Mentality” he had… I tried to take as much as possible. It was an inspiration, it helped me.

“It really touched me. I’m not a very emotional one, that tragedy there touched me enough. Watching the videos I appreciated his mentality even more, still today I try to do what he did.”