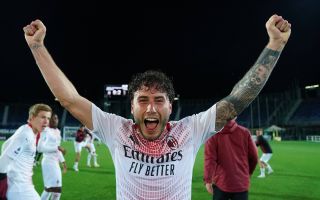 Calabria highlights ‘desire to stay’ at Milan and discusses future: “Now the goal is to win”

Davide Calabria was one of Milan’s best players this past season as he managed to bounce back from what was a disappointing 2019/20 campaign. Now, he’s an undisputed starter in Stefano Pioli’s team.

In addition to his strengths as a defender, being the best tackler in the league, Calabria also bagged two goals and two assists this past season. The two goals, as we remember, were two great strikes against Genoa and Juventus respectively.

It’s not exactly a surprise, therefore, that Milan soon will sit down and discuss the current deal as the right-back’s salary is rather low. Since he came from the youth ranks, that is to be expected but a heftier contract could soon be in place.

Speaking to the weekly edition of Gazzetta Dello Sport (via MilanNews), Sportweek, Calabria was asked about the season and the breakthrough he had. He made it clear that he’s currently living the dream.

“Playing for Milan was my dream, now the goal is to win with this shirt,” he began.

It was a long ride, but the Rossoneri managed to secure Champions League qualification…

“You definitely need the talent to play at these levels. Then, however, there are other components, including the historical period of the club. I think I have the quality to play here: above all mental strength, resilience, the desire to stay in this team.

“I can become stronger in everything, I’m still relatively young. Playing in the Champions League will be a big leap: facing great players, in great matches, in big competitions it’s the only way to improve.”

“The compliments of someone like Maldini or other club representatives made me happy. They advised me to think a little more “selfishly”, to believe in my means and exploit them. At first, I was too humble. In football, you have to be aggressive and mentally strong. The sooner you understand, the sooner you get results.”

Many ownership changes in a short period, what were the differences?

“Differences? You understand it when there is a stable club behind it. And you inevitably suffer when it’s missing: it’s more difficult to isolate yourself to try to give your best. But in recent years, even in the negative moments, it was a strong club, from all points of view.”

“He pushed me and the others to give my best, since he joined we have improved a lot. I’m really happy that Ibra is one of us. The thing that surprised me most about him is the desire to never lose: for him, there is only victory.

On his opposite man Hernandez…

“Mother Nature has given him an excessive physical power and a speed that make him difficult to stop when he accelerates. But I wouldn’t say that I envy him, everyone has his characteristics. I’m happy to play with him, he’s a good guy, who works seriously.”

READ MORE: Abate explains what Hernandez must improve: “He can become the best in the world”