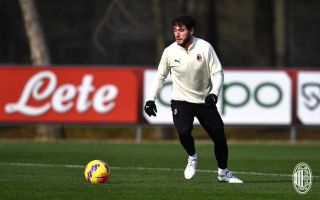 CM: Calabria in a battle for a starting spot vs. Roma as Pioli studies a wild card role

Davide Calabria could well be set to continue his reputation as a wild card player in Stefano Pioli’s plans given AC Milan’s current lack of numbers in midfield, a report claims.

Calciomercato.com reports that the Rossoneri coach will have him available again for Thursday’s big game against Roma at San Siro to kick off 2022, and the amazing thing is that without him Milan lost three league games plus the Liverpool Champions League match, but prior to his injury were unbeaten domestically.

The defender has now completely disposed of the injury and has already started training with the squad, but it is unknown currently if he will get the nod from minute one against the Giallorossi as he is in a battle against Alessandro Florenzi, who really wants to face the club he is on loan from.

Pioli is studying a new role for Calabria too as per the source. With Franck Kessie and Ismael Bennacer at the Africa Cup of Nations, Milan will have to find an internal solution because new signings are not exepcted. Among the ideas is to try Calabria in the double pivot, as he has done before such as in the game against Juventus last season.

READ MORE: Milan aiming to get preferential lane over Inter and Napoli for Empoli defender