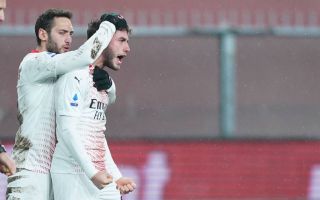 AC Milan full-back Davide Calabria has revealed his belief that he is currently in the best form of his career, and encouraged his team-mates to take things a game at a time.

Heading into preseason it seemed a formality that Milan would sell the Primavera graduate after a disappointing 2019-20 campaign that was hampered by injuries, suspensions and general poor form.

Calabria’s resurgence as a Milan player after a difficult time of things are a perfect reflection for the team in general, as pretty much every member of the squad has raised their level of performance and the plans of Stefano Pioli are now bearing fruit.

Now, there is even the talk of a potential renewal for the Primavera product, who made his debut for Italy recently showing just how far he has come since the end of last season.

Calabria was interviewed by Sky Italia about the current moment that he is experiencing, agreeing that it is the best of his career so far.

“I think so, both physically and mentally. We are having a great time with the team, I’m happy with this,” he said (via MilanNews).

“We must not pay attention to the standings, Milan must aim as high as possible, then that we come from a difficult historical period is a fact but we are up there, despite the injuries and the pandemic.

“The quality is there, not we have to get distracted and keep working because we have the qualities to stay there until the end.”