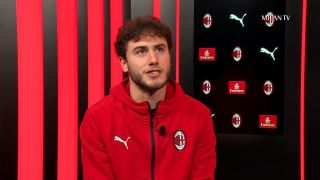 After what was a tough last season for him, Davide Calabria has worked his way back to the top of the pecking order. The right-back has gone from strength to strength and is now a key player for Milan.

The 24-year-old scored his first goal of the season last time out, firing an impressive shot from distance to beat Genoa’s goalkeeper. In an interview with MilanTV ahead of tomorrow’s clash, he spoke about the current run of form.

“Two draws in the space of a few days can’t start causing us doubts. We’ve been playing a game every three days for a long time now, and except for the last game which was our least impressive, we have deserved to win,” he stated.

Take a look at the full interview below with subtitles. Hopefully, Calabria will continue his impressive form away at Sassuolo tomorrow.

Ibrahimovic sends strong message to Leao: “If he doesn’t help himself, no one can help him”
6 December 2021, 21:37
Serie A Standings