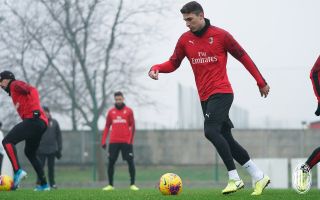 Following the disappointing 0-0 draw against Sassuolo on Sunday afternoon, AC Milan were back on the training ground today as the prepare for the important clash against Atalanta this weekend.

As it is the last game before the Christmas break, there is no time to waste for Stefano Pioli, who can afford to push his players a little extra this last week. As stated on the club’s official website this afternoon, the team was divided into two groups.

Both started out in the gym to work on their recovery. Then, those that weren’t involved in the Sassuolo game (or played little) featured in a friendly game against the under-18 side. The first team won the clash, which consisted of three 20-min periods, by 7-0.

Caldara and Leao each bagged a brace, while Calabria, Castillejo and Rebic scored the rest of the goals. Hopefully, the Rossoneri can bounce back from the draw against Sassuolo and grab all three points away at Atalanta.