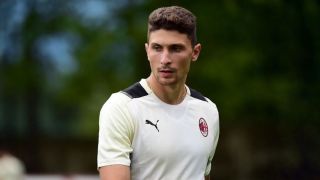 The injury that Simon Kjaer sustained and the subsequent operation to repair knee ligaments means that his season is over and Milan will intervene in the market, but they might not sign someone ‘new’.

According to La Gazzetta dello Sport (via MilanNews), the Rossoneri do not intend to play the last few months of the season with Tomori, Romagnoli and Gabbia as the only option, so Paolo Maldini and Ricky Massara are working to find the right profile.

The management are not interested in signing a new player just for the sake of it, but instead they want a player who can really improve the team. The idea is to bring a ready-made defender in, and the paper claims that the “simplest” solution would be to bring Mattia Caldara back from his loan at Venezia.

After some torrid years due to a string of serious injuries, the Italian has finally returned to play with some continuity and at good levels too. He already knows Stefano Pioli’s way of working and playing given the preseason spent under him at Milanello, so Maldini and Massara could try and find an agreement with Venezia to terminate his loan early.