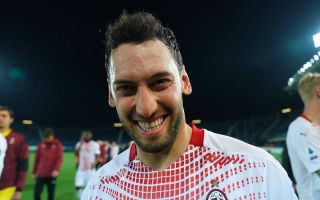 Calhanoglu describes Milan as ‘special’ but reveals future is uncertain: “I haven’t decided yet”

AC Milan playmaker Hakan Calhanoglu has revealed that he has not yet made a decision regarding his future with his contract set to expire.

Calciomercato.com among other sources have recently reported that Calhanoglu has not yet accepted the offer from Milan of €4m net per season and instead he has received expressions of interest from many clubs. Juventus have been talking with his agent for some time and there is a desire on the Bianconeri’s part to exceed the Rossoneri’s offer.

However, Al-Duhail – a team from Qatar where the former Roma and Juve defender Mehdi Benatia plays – have now come forward. Talks between the Qatari club and Gordon Stipic are progressing quickly with an offer of €8m net per season ready.

Amid rumours of a potential move to Milan’s rivals or to another continent, Calhanoglu spoke to reporters about his future given the uncertainty surrounding his contract situation.

“Milan is special for me.  After years we are back in the Champions League, I am very happy that we have achieved this goal. I don’t want to talk about my future, I have the European Championship ahead of me, I haven’t decided yet,” he told Fotomac.