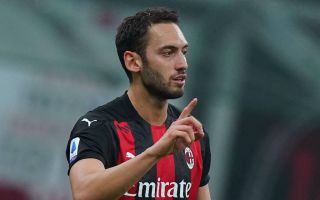 Calhanoglu identifies areas of his game he must ‘try to improve’ and admits: “We needed rest”

AC Milan playmaker Hakan Calhanoglu believes he and his team-mates are at their best after the rest in midweek ahead of tonight’s game against Parma.

As was expected, Stefano Pioli has made 10 changes to his starting XI from the team that beat Sparta Praha. Gianluigi Donnarumma will be back in goal, and in front of him will be Davide Calabria, Matteo Gabbia, Alessio Romagnoli and Theo Hernandez.

Ismael Bennacer and Franck Kessie are in midfield, while centre-forward Ante Rebic will be supported by Samu Castillejo on the right, Brahim Diaz in the middle and Hakan Calhanoglu on the left.

Calhanoglu spoke to the microphones of Milan TV during the pre-match build-up, with his comments transcribed by MilanNews.

On getting some rest: “We needed rest because we play every 2-3 days and it’s not easy to play at the same pace. Now we are at our best and we want to win.”

On the absences of Ibrahimovic and Kjaer: “We hope that both Simon and Ibrahimovic will be back soon. Zlatan misses a lot in front but we are doing equally well without him. Without Ibra, now it’s up to me, Romagnoli and Gigio to try and drag the team.”

On Parma: “We know that the teams behind us should not be underestimated. Even today we want to win and we must try to think only of us. The other teams are watching us but we must stay focused.”

On free-kicks: “Messi shoots very well from free-kick and has a crazy level. Ronaldo and Eriksen also kick very well. I have to think about myself and try to improve.”