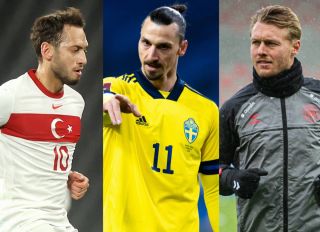 AC Milan had a number of players called up for international duty over the recent break, and for some it went better than others.

The 14 players called up were split amongst having 2022 World Cup qualifiers, friendlies, AFCON qualifiers and U21 European Championships action.

Below are how each fared, including a bad day for two of Milan’s Italy U21 players but an excellent comeback for Ibrahimovic and more good form for Calhanoglu…

Donnarumma was a starter in all three of Italy’s games and did not concede a goal, keeping a clean sheet in the 2-0 win over Northern Ireland, the 2-0 win over Bulgaria and the 2-0 victory against Lithuania.

Tonali received a red card in Italy U21’s 1-1 draw against the Czech Republic and was suspended for the next two games so returned early. Gabbia meanwhile played 90 minutes of the aforementioned game, was suspended for unsportsmanlike behaviour meaning he missed Spain 0-0 Italy, and played all 90 minutes in Italy’s 4-0 win over Slovenia.

Simon Kjaer started in Denmark’s 2-0 win over Israel and well as their 8-0 drubbing of Moldova, but was replaced in the 77th minute of that game. He also played 90 minutes in Denmark’s 4-0 victory over Austria.

Ibrahimovic started two games for Sweden including the 1-0 win over Georgia 1-0 during which he got an assist in his first game for his country in almost five years. He then got another assist – this time more spectacular – in the 3-0 win over Kosovo, but didn’t play the friendly against Estonia.

Zlatan Ibrahimovic produced an excellent backheel flick to set up Sweden's opener in their 3-0 win in Kosovo. The first consecutive assists in FIFA World Cup Qualifiers games since 2012.#WCQDiMolaTV pic.twitter.com/6KmRgRjxfm

Calhanoglu gets the prize for the best international break performer, as he racked up two goals and three assists. In the game against the Netherlands he managed one of each, and added an assist in the 3-0 win over Norway, before getting a goal and an assist in the 3-3 draw with Latvia. Interestingly, he played twice as a left winger.

Hauge played 45 minutes of Norway’s 3-0 win over Gibraltar, but did not play a single minute after that remaining on the bench against Turkey and Montenegro.

Saelemaekers was called up but was not even on the bench for Belgium’s 3-0 win over Wales, remaining an unused sub during the 1-1 draw with Czech Republi and 8-0 victory over Belarus.

Krunic started during the 2-2 World Cup qualifier draw against Finland but was not even on the bench for the 0-0 friendly against Costa Rica. He started against France in another qualifier three days later, playing 86 minutes.

Bennacer was not even on the bench as Algeria drew 3-3 with Zambia in an AFCON qualifier, but it was apparently pre-agreed. He then started in the 5-0 win over Botswana, playing 60 minutes.

Kessie started both games as the Ivory Coast beat Niger 3-0 and Ethiopia 3-1, scoring with a goal from the penalty spot in the second game.

Brahim was a starter for Spain U21s against Slovenia and got an assist in a 3-0 win as he played 83 minutes, but picked up an injury and missed the 0-0 draws against Italy and Czech Republic that followed.

Dalot probably had the most tiring international break of any player as he played 90 minutes three times. He was a starter in Portugal U21’s 1-0 win over Croatia, then in the 2-0 win over England and the 3-0 win over Switzerland in the U21 Euros group stages.

Pierre Kalulu remained on the bench for all three games as France lost 1-0 to Denmark but then responded with 2-0 wins over Russia and Iceland.