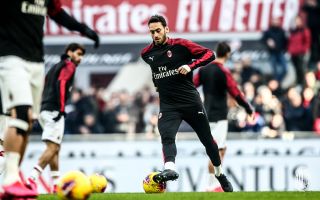 The agent of AC Milan midfielder Hakan Calhanoglu has confirmed that his client is happy at the club and wishes to remain beyond the summer.

There have been a number of rumours over the past few months suggesting that Calhanoglu is considered sellable by the Rossoneri management despite the fact he has been virtually ever-present in the starting XI since his arrival from Bayer Leverkusen three years ago.

The vast majority of media outlets though believe the Turkey international will play a key role under Ralf Rangnick should he arrive as the next Milan boss, as the German is a keen admirer of his abilities.

Nonetheless there is still a contract dilemma to sort out sooner rather than later, as Calhanoglu’s deal runs out in 2021 which means he is 12 months away from being able to leave for free.

His agent though has seemingly confirmed his client’s intentions to remain at Milan.

“Hakan is happy at Milan, he is proud to wear the 10, he feels the confidence of everyone, at such a glorious club,” he said (via MilanNews).

“Then there are also individual ambitions. His contract is expiring in 2021, I have not yet spoken to AC Milan, but we have great ambitions.”

“In my opinion yesterday he played an important game, he was the protagonist on all three goals. I am not exaggerating: the way Hakan prepared himself during the break for the Corona was excellent.

“He proved to be a true professional, he has ambitions personal and important teams. I am not surprised, it is only a small part of what we will see.”

On his natural position: “I think he is a player capable of playing in multiple positions, in this scheme he is very happy. Behind the striker, he has a great first touch. He has already played like this in Germany.

“He is a player who can read the game and is flexible at tactical level on the field. Of course, yesterday’s performance, in my opinion, reflects all his desire and ambition.”

“His goal is to play in the Champions League, I don’t hide it. And it certainly is among the reasons for this return to the top, concentrated and charged.

On Rangnick’s possible arrival: “I can’t take part in any speculation about Rangnick’s arrival at Milan. Rangnick isn’t at Milan, it’s a question I can’t answer.”