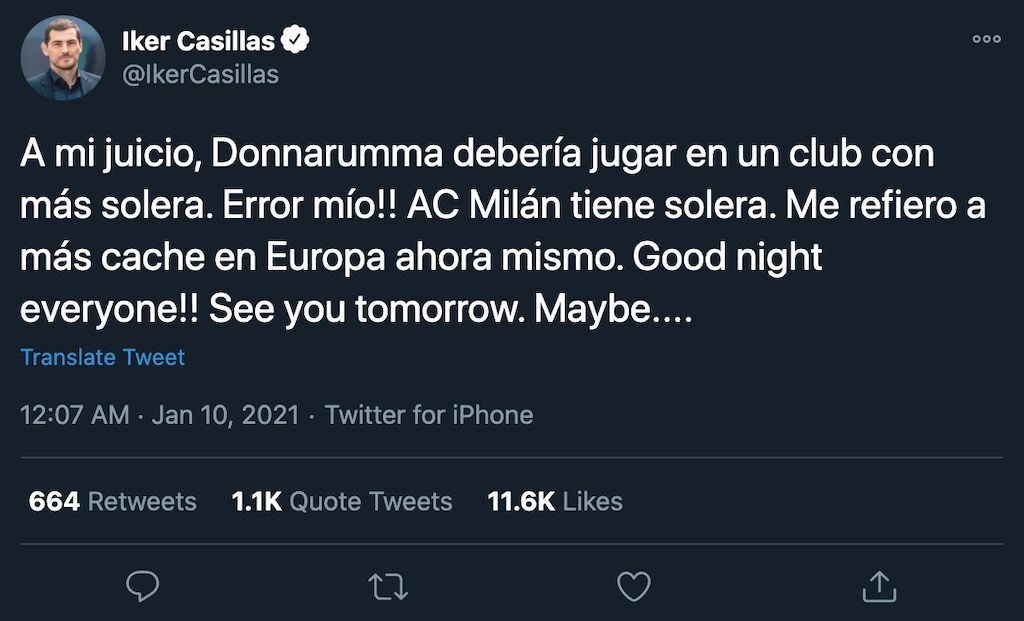 Casillas angers some fans with Tweet: “Donnarumma should play for a club with more tradition”

Former Real Madrid goalkeeper Iker Casillas has incurred the wrath of some Milan fans on Twitter with his comments about Gianluigi Donnarumma.

Milan face a race against time to secure the future of their prized young shot stopped as his current contract has just six months left to run, and while talks have been ongoing with Mino Raiola for some time there is nothing to suggest an agreement is imminent.

SportMediaset (via MilanLive) recently reported that Chelsea and PSG have opened talks with Raiola over signing his client and would be willing to put a contract worth €12-14million net per year on the table.

Late last night, Iker Casillas decided to give his thoughts regarding the future of Gigio Donnarumma and he made a surprising claim.

“In my opinion, Donnarumma should play for a club with more tradition. My mistake !! Milan have a tradition. I mean more value in Europe right now. Good night to all !! See you tomorrow. Maybe….”

Of course, as expected the replies to the tweet from Milan supporters are far from complimentary, with supporters firmly believing that a return to the Champions League is on the cards and that Donnarumma would therefore be better serves staying with his boyhood team.