AC Milan are back in Champions League action on Tuesday night as they face off against Red Bull Salzburg in their first group stage game.

Milan will be hoping to do much better than they did upon their return to the Champions League last season in which they finished bottom of an admittedly tough group involving Liverpool, Atletico Madrid and Porto after seven years away from the competition.

Stefano Pioli’s men will be buoyed by the result at the weekend as they came from behind to beat Inter 3-2 in a thrilling Derby della Madonnina clash at San Siro.

Pioli is facing the difficult task at the moment of trying to keep everyone fresh through rotating in the right moments while also fielding a starting line-up that is capable of winning every game they take to the field for.

Multiple changes were made for the game away at Sassuolo and a 0-0 draw was the outcome, whereas what is potentially the strongest XI on paper achieved a memorable derby win.

Pioli will have to do without four players who will be absent due to injury, namely Zlatan Ibrahimovic, Rade Krunic, Alessandro Florenzi and Ante Rebic, with the latter having therefore not yet recovered from the back problem that has kept him out of the last two games.

The latest reports suggest that Pioli will turn to his main protagonists again in the hopes of starting the group stages with a win. That means a ‘first choice’ back four of Davide Calabria, Pierre Kalulu, Fikayo Tomori and Theo Hernandez in front of Mike Maignan.

Ismael Bennacer and Sandro Tonali are expected to be in the double pivot, with a doubt about who starts on the right wing out of Junior Messias and Alexis Saelemaekers. Charles De Ketelaere, Rafael Leao and Olivier Giroud should complete the attack.

Red Bull Salzburg won the Austrian Bundesliga at an absolute canter last season proving their status as the new powerhouses of football in their country, and they have started the 2022-23 campaign in formidable form having won six of their seven games, scoring 18 goals and conceding just three.

That being said, there has been a lot of turnover during what was a hectic summer that started when they lost their previous head coach Jesse Marsch to RB Leipzig in 2021, with him then going on to Leeds United.

He took Brenden Aaronson and Rasmus Kristensen with him to West Yorkshire during the recent summer window, while other exits included Jerome Onguene, Zlatko Junuzovic and Karim Adeyemi.

This kind of transfer strategy is nothing new to a club that prides itself in being able to bring players through their academy system and also sign gems on the cheap from around Europe to develop and eventually sell.

Matthias Jaissle is the head coach now and he will be hoping to replicate last season’s campaign in which Salzburg progressed in a group containing Lille, Sevilla and Wolfsburg.

The Leipzig-bound Benjamin Sesko remaining in the squad for this campaign. Fernando and Noah Okafor are two forwards who have started the season well, while it must also be noted that all nine players who have scored for Salzburg in the league this far are 24 and under.

Milan have only ever played two official fixtures against Red Bull Salzburg which is understandable given their relatively recent rise. The last two meetings were in the 1994-95 edition of the competition (when they were Casino Salzburg), with the Rossoneri winning 3-0 at home and 1-0 away en-route to the final.

Milan do have recent history against other Austrian sides too, including Austria Wien whom then-manager Vincenzo Montella engineered two 5-1 wins against in the 2017-18 Europa League group stages.

The Diavolo also faced off against Wolfsberger AC in preseason and emerged 5-0 victors, with the five goals coming in a 27-minute spell stretching from just before the break to just after the hour mark.

➤ This will be only the third European meeting between FC Red Bull Salzburg and Milan, with the previous two coming in the 1994-95 UEFA Champions League group stage. Milan won both clashes that campaign en route to reaching the final.

➤ Milan have only lost one of their 11 previous meetings with Austrian clubs in major European competitions (W8 D2), a 2-5 defeat to SK Rapid Wien in the 1957-58 European Cup.

➤ The Rossoneri have won each of their last five European matches against Austrian sides by an aggregate score of 16-2, most recently beating FK Austria Wien 5-1 in the 2017-18 UEFA Europa League.

➤ No Austrian side has ever beaten an Italian opponent in the UEFA Champions League in 10 previous meetings (D2 L8). There have only been three instances of sides from one nation playing more matches against sides from another nation without ever winning one in the competition: Czech Republic v English sides, Czech Republic v Spanish sides, and Romania v German sides (all 12 games, no wins).

➤ FC Red Bull Salzburg are participating in a fifth UEFA Champions League campaign, including in each of the last four seasons running. The Austrian side progressed from the group stage for a very first time last season before being eliminated in the last 16 by FC Bayern München.

➤ After a seven-season absence from the UEFA Champions League proper, Milan are competing in the tournament for a second successive campaign. They were eliminated from last season’s group stage, the first time they failed to progress from the opening group since 1999-00. 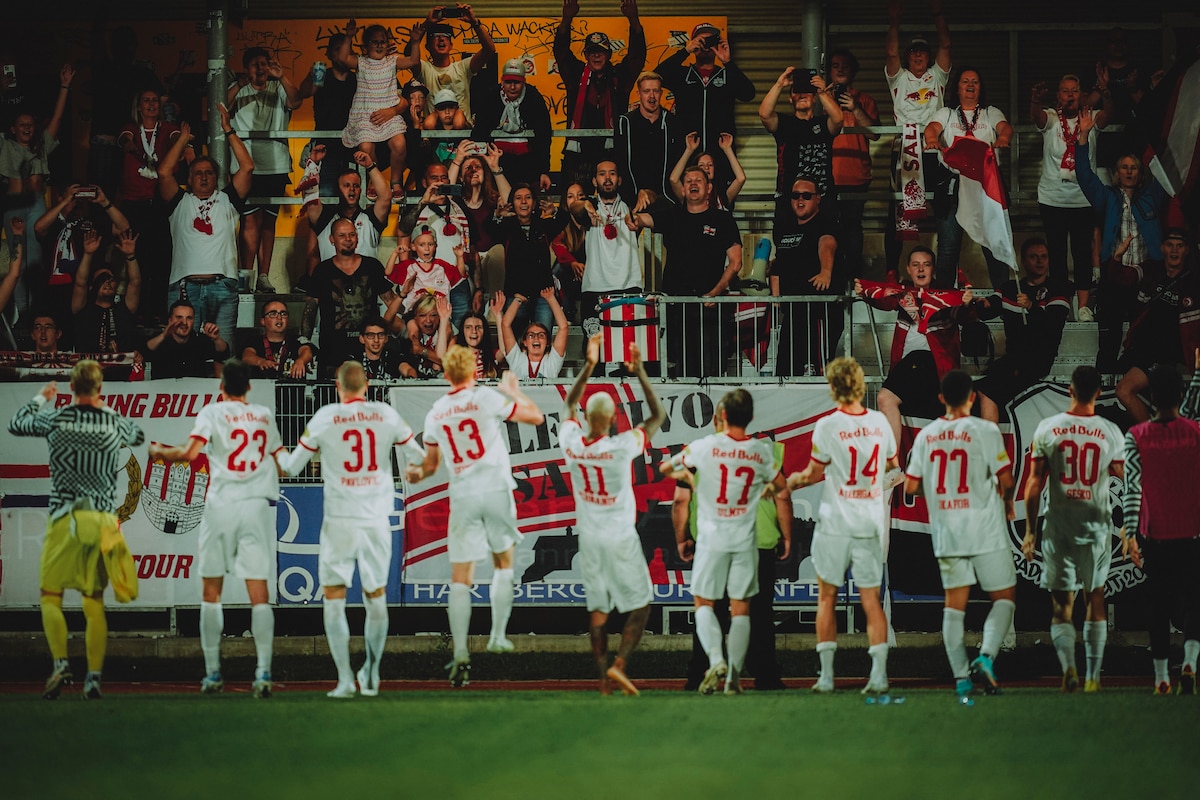 ➤ Milan have won just one of their last nine UEFA Champions League matches (D2 L6), although that was their last such away game at Atlético de Madrid in November 2021. The Rossoneri last won back-to-back away games in the competition in October 2009.

➤ Excluding own goals, each of FC Red Bull Salzburg’s last 14 UEFA Champions League goals have been scored by players aged 23 or younger.

➤ Of Milan striker Olivier Giroud’s last 12 UEFA Champions League goals, 11 have been scored away from home. Indeed, of all players to score more than 10 goals in the competition, Giroud has the highest proportion scored away (78% – 14/18).

➤ Excluding own goals, all five of Milan’s goals in last season’s UEFA Champions League were scored by a different player (Ante Rebic, Brahim Díaz, Rafael Leão, Junior Messias, Fikayo Tomori), the most scorers by a team in a season in the competition without any netting more than one since Celtic in 2017-18 (also five).

For Milan this must be a year in which certain young players have a coming of age on the biggest stage. Of course Rafael Leao will look to announce himself by building on his brace plus an assist in the game against Inter.

Olivier Giroud is a veteran who knows all about Champions League nights given that he won it with Chelsea, and the feeling is that the Portuguese winger and left-back Theo Hernandez will be key in providing for the Frenchman.

The double pivot of Sandro Tonali and Ismael Bennacer must also do everything they can to dictate the tempo of the game, because Salzburg will be happy to see a basketball match erupt.

As aforementioned, Fernando and Okafor are the forward duo that are causing some damage domestically for Tuesday’s hosts. They have four goals each while the former has also added three assists.

Sesko has two goals and two assists to his name and continues to show why Leipzig snapped him up amid interest from the Premier League, and full-back Andreas Ulmer plus Danish midfielder Maurits Kjærgaard are two young talents that perfectly marry with Salzburg’s intense and exciting brand.

Given Salzburg’s recent tournament experience, their young squad plus the fact they will have the backing of almost 30,000 fans at home, nothing points to this being an easy game. Milan should have the quality to win, but it really depends a lot on how much they can soak up the inevitable pressure and make sure the game is played at their pace.