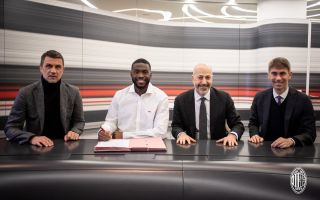 Tomori discusses Milan happiness, wanting to impress Maldini and what made him go ‘wow’ on arrival

Tonight’s game against Manchester United will provide yet another chance for Fikayo Tomori to show what he can do, but he has insisted the future is far from his mind.

The centre-back arrived on loan from Chelsea back in the January transfer window with an option to buy set at €28m, and while at first there might have been doubts about such a high figure the Englishman continues to show he could well be worth every penny with solid performance after solid performance.

Tomori spoke to the Times on the day of the game against Manchester United, a personal one for him given his ties to Chelsea and the fact he grew up as a person and as a player in England.

He offered some background on why he decided to join Milan, citing the history of the club and also the words of Paolo Maldini as being hugely influential.

“Before coming here I spoke to Paolo Maldini. Obviously I knew that Milan were a great club, but when I arrived and went to the museum of Casa Milan, I saw all the Ballon d’Ors, the photos of the great players who were there before, then the seven Champions League and I really understood,” he said (via Calciomercato.com).

“Wow. When I go to the training ground and see Shevchenko’s pictures, Maldini, Kakà and Seedorf, and I think they have all been here and have all sat in these changing rooms, I am filled with pride.”

On Zlatan Ibrahimovic’s impact, he added: “Even when he’s not playing he goes into the locker room and talks like he’s starting the match. He’s motivating and that motivation involves the team. When he’s close, you feel his presence: he’s not intimidating or daunting, everyone wants to raise their level, you you want to reach that level and meet his expectations.”

On Maldini: “I want to impress him. It is as if one day as a striker you find yourself Cristiano Ronaldo or Lionel Messi as your sporting director and you hear these words from them for you. It’s crazy. Before every match, speak, say ‘come on!’ and he says well done at the end. If I didn’t play well, he comes anyway and says ‘well done’.”

On his future: “At the moment, I like being in Milan, playing and having this experience. Whether I will stay here longer or not, I don’t know, I try not to think so far. There is still a long way to go this season.”