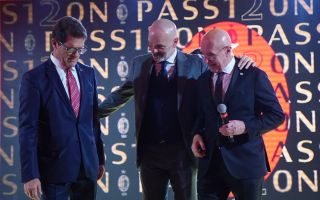 Club icons Capello and Sacchi back Milan for title challenge: “Everything is possible”

Two of AC Milan’s legendary former bosses have insisted that the current side have what it takes to win a 19th Scudetto this season.

Milan were able to extend their unbeaten league run to 21 games and also their lead atop the Serie A table to five points for the time being with a comfortable victory on Sunday afternoon in which a header from captain Alessio Romagnoli and a Franck Kessie penalty were more than enough.

Looking at the top five European leagues – Italy, France, Spain, Germany and England – no other team has the points average this season that the Rossoneri do apart from Atletico Madrid.

Capello is a man who not only knows what it is like to win league titles with Milan but also to do it without losing a single game, having been at the helm for the record-breaking 58-game unbeaten run in the 1990s.

He praised Pioli during an interview with il Corriere della Sera, before going on to state exactly why Milan should have belief.

“He has huge merits that in my opinion aren’t fully recognised,” Capello said (via Football Italia).

“In the past, with Lazio, with Fiorentina, Stefano had shown to be a coach with ideas and personality. He needed time and trust. Keeping him this summer was the right decision and he proves it now.

“Milan are a candidate for the Scudetto. Everyone can dream big, think big. And Milan can do it now. The win against Napoli was an impressive show of strength.

“But the win against Fiorentina surprised me too. The ease and their determination. Milan imposed themselves as a great side, without suffering and controlling the game like the great teams do. Without anxiety and above all, without Ibrahimovic.

“Inter and Juve have a technical background and choices that will clearly bring them back to being protagonists, they have big and rich squads.

“Lazio are an enigma, Atalanta depend on how the Champions League continues and Napoli are structured. But Milan, trust me, are up there because they deserve it and they can stay there until the end.”

Meanwhile, Sacchi gave an interview to La Gazzetta dello Sport during which he also affirmed his desire that this Milan team can go on and win the league.

“Everything is possible when there is a great club at the top, with history, style, competence, standards and visions,” he said (via MilanNews).

“The Rossoneri move in a compact and organic way, supported by a collective and a team spirit that increase their collaboration, communication, synergy and internalisation. The game flows quickly, everyone practices the offensive and defensive phase, everyone is united by an invisible thread that is the game.”