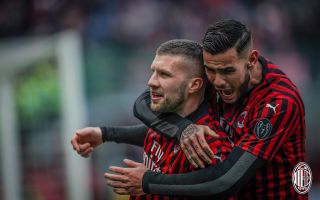 AC Milan legend Massimo Ambrosini has highlighted three players that his former club must build around in the future.

Ambrosini made well over 300 appearances for Milan during an 18-year spell at the club, and we took a look back at his exceptional performance in the 2007 Champions League final earlier this year.

He won several titles with the Rossoneri and captained the side from 2009 to 2013 following Paolo Maldini’s retirement, and he still keeps up with how his old side are getting along.

While it looks like being another season without a top four finish for Milan, Ambrosini has picked out some positives from the current core of players.

“Theo Hernandez has shown that he can stay in this AC Milan. Even after a difficult start, Bennacer has managed to demonstrate great things,” he told Sky Italia (via MilanNews).

“Leao has yet to prove much, he is an interesting surprise while Rebic is definitely an important player but he carry keep all the weight of the attack on his shoulders.”

Ambrosini also talked about what the Rossoneri’s business could look like, insisting that if owners Elliott Management Corporation have a plan then they should stick to it.

“Paquetà could be sacrificed. Milan has some bases on which to start again and, in a certain sense, they must do so with conscience and according to the dictates of the management and the technical guide.”