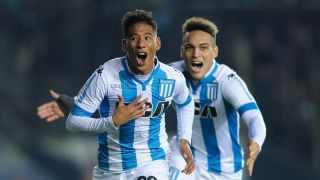 CM: AC Milan have €15m playmaker lined up for the summer after January attempt

AC Milan will make a fresh attempt to sign attacking midfielder Matias Zaracho from Racing Club in the summer, according to a report.

Calciomercato.com are Milan reporting that Milan ‘really tried’ to bring Zaracho to the San Siro in January, with Rossoneri scouts having observed him for a long time and having been impressed with his versatility and ability to occupy multiple midfield roles.

Paolo Maldini – about ten days ago – tried for Zaracho, even meeting with his agent Agustin Jimenez at Casa Milan. The initial intention was to try and take him on loan from Racing Club, however the Argentine side were not open to that idea.

Despite the knock-back, Milan are still observant over Zaracho. The report adds that the 21-year-old – who has three goals and an assist in 15 league games this season – will be followed until the end of the campaign.

A new offer in the coming months is therefore not excluded, if conditions are favourable. Milan would like to invest €15million, but are waiting for Racing’s stance to be revealed nearer the re-opening of the window.