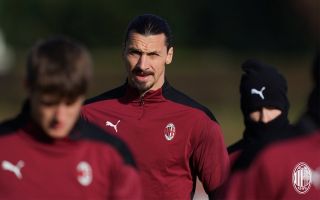 CM: All parties agree on Ibrahimovic’s renewal with announcement imminent – the numbers

Zlatan Ibrahimovic will soon sign a new contract with AC Milan to confirm his stay at the club into his 40s, according to a report.

As reported by Calciomercato.com there remains only fine details to be resolved and a bureaucratic quibble between the Milan lawyers and the Swedish striker’s lawyers, then the signature on a one-year deal will arrive.

The renewal is already expected in the next 48 hours as the parties have agreed to continue together in the year in which Ibra will celebrate turning 40. Ibra and agent Mino Raiola have now found an agreement with Gazidis, Maldini and Massara, a choice dictated by heart but also mind and body.

That is because at 39 Zlatan still feels like a player capable of making his contribution to the team and his 17 goals and 3 assists in 25 appearances this season – including 15 goals in 17 league matches – proves him right. Thanks to his goals, Milan are in second place in the table and hopefully on course for a Champions League return.

Out of 45 matches played by Milan so far in all competitions, Ibra has played 25 and skipped 20, so almost 50%. He has 17 appearances out of 32 rounds in Serie A and after yesterday’s forfeit due to a calf fatigue, he is also at risk for the next match against Lazio.

Ibrahimovic will sign until 2022 earning the same salary he receives now (€7m net) but the parties have agreed that the fixed part will be lower and there will be bonuses to reach the full amount.