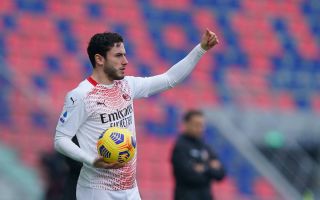 CM: Calabria ‘now the best Italian right-back’ – the latest idea regarding his renewal

AC Milan are in talks with Davide Calabria and his entourage over extending his contract beyond the current expiration, a report claims.

In addition to captain Alessio Romagnoli, Calabria and Franck Kessie’s contracts will expire in the summer of 2022. Speaking on our podcast, Fabrizio Romano shared some details about the duo and the renewal talks, confirming that talks are on with all three.

As Calciomercato.com reports, things have drastically changed for Calabria in the last six months as he has found himself going from an obvious candidate to be sold to a protagonist in the current team. With 25 appearances, two goals, one assist and a lot of good performances, there is even talk he will be a starter for Italy at the European Championships this summer. The headline even says the 24-year-old is ‘now the best Italian right back’.

Work has begun to renew his contract expiring on 30 June 2022 and the contacts have been largely positive, the report adds. The idea is an extension until 2024 or 2025 with a small wage increase.