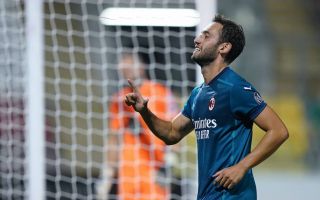 CM: Calhanoglu decisive again – latest idea regarding his renewal as the player wants to stay

The Turkey international assisted Ibrahimovic for the first goal and scored the second, meaning he has both scored and provided an assist in four of his last seven games for Milan across all competitions.

However, the contract situation is one that looms given the fact Calhanoglu’s deal expires in June 2021. As Calciomercato.com notes, the time has come for the club to discuss a renwal with his agent Gordon Stipic.

Stipic has already been to Milan to discuss his client’s future with the player himself, but now concrete negotiations must be entered between the parties.

The idea is to extend the current agreement until 2024 with a salary raise. Calhanoglu for his part wants to stay at Milan, so now it’s up to directors Maldini and Massara to prevent the Turkish international from becoming a tempting market opportunity for several top European clubs.