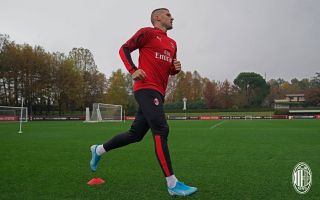 CM: Decision made on future of AC Milan winger – he will return to Germany

AC Milan winger Ante Rebic is reportedly still destined to leave the club and return to Eintracht Frankfurt despite comments from their sporting director suggesting otherwise.

According to the latest from Calciomercato.com, Rebic’s short five-month adventure with Milan will end in January. The Croatia international only arrived on deadline day from Eintracht in a two-year loan deal with Andre Silva going the other way, but things haven’t exactly gone to plan.

Rebic has amassed less than 200 minutes of competitive game time since moving to the San Siro and is seemingly not in the plans of head coach Stefano Pioli, failing to register a single goal or assist thus far.

We revealed on December 13 that Rebic had talks with Eintracht through his entourage to gauge the possibility of an early return, and he was photographed dining with his former team-mates as well.

Then, Calciomercato.com added that an agreement over the early loan termination is just ‘details away’ – but the sporting director of the Bundesliga side – Fredi Bobic – poured cold water on the rumours of a return, telling Kicker that there is ‘nothing in it’.

Nonetheless, despite the conflicting rumours it appears that Rebic is heading back to the Commerzbank-Arena.