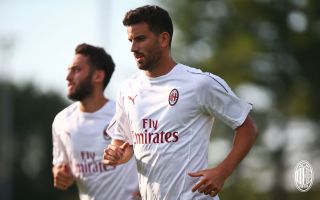 CM: Eight players at risk as Milan want to thin out squad by selling – the situation

With Sandro Tonali and Brahim Diaz one step away, as well as Tiemoué Bakayoko, Milan are making moves in the window. What that means though is that some players will have to leave to make room in the squad.

Calciomercato.com take stock of potential outgoing for the Rossoneri, claiming that a new arrival in the centre-back department would see Matteo Gabbia, Mateo Musacchio and Leo Duarte at risk.

Gabbia is a player liked by Genoa but Milan, at the moment, do not want to get rid of him. Duarte could go to Fiorentina as part of a swap deal for German Pezzella, but that remains difficult. As for Musacchio, there was interest from Valencia, but his injury complicates his exit.

Right-back Davide Calabria and left-back Diego Laxalt are on the market, with Milan waiting for concrete offers. The former is interesting both Sevilla and Real Betis with the Rossoneri keen on generating capital gains, while Lokomotiv Moscow have been linked with Laxalt.

In midfield, a meeting is scheduled in the coming weeks between the agent of Rade Kurnic and the Milan management. The former Empoli man is not considered non-transferable and could leave for €8m, with Freiburg and Torino keen, though the latter seem to have focused on Linetty.

In attack, Lucas Paquetà and Alen Halilovic are both not deemed part of the plans. The Brazilian could generate funds through a sale or could be used as a counterpart to reach other market objectives.