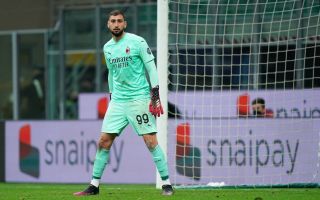 CM: Fan row, tears and an unanswered offer – Juventus-Milan could be the night of Donnarumma

The topic of Gianluigi Donnarumma’s future has dominated the media headlines in the build up to Milan’s game against Juventus tonight.

As Calciomercato.com writes, he spotlight is inevitably focused on Donnarumma because of his contractual situation and the fact his renewal does not seem to be imminent, with the Bianconeri on pole to land him should he decide to leave the Rossoneri.

Donnarumma’s meeting with the Milan fans outside Milanello before the last league match against Benevento has not helped the certainty or clarity of the situation as it was a heated confrontation in which the fans asked him not to play against Juve without having signed a renewal first, leading Gigio to tears of emotional stress and tension for a promise that, for obvious reasons, he could not make.

Every negotiation for renewals is frozen until the end of the season to allow the team to concentrate solely on the season, but the stakes tonight are very high. Nothing has moved with Milan who saw their first two proposals rejected (respectively €6m net per season for five years and €7m net for five years, each with €1m bonuses) and has not responded to the third (€7m + €1m for two years).

Milan have decided to secure the signing of Mike Maignan from Lille as a possible replacement in the meantime while Juve look for a way to offload Szczesny to try and push concretely for Gigio. The most important unknown – the Champions League fate of both clubs and a decisive discriminant for choosing the future – passes through tonight’s game, a game in which he will be a protagonist for the Diavolo.