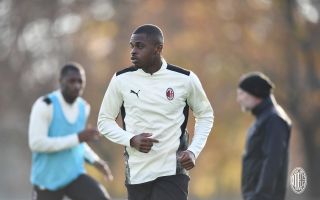 AC Milan head coach Stefano Pioli has a plan for how to replace the injury Davide Calabria in the next two games, according to a report.

According to Calciomercato.com, the calf strain that Calabria sustained while on international duty means that that the Rossoneri full-back will not be available to Pioli for Saturday night’s match at the Franchi against Fiorentina nor against Atletico Madrid in the Spanish capital.

Of course there are two obvious choices to replace him: loanee Alessandro Florenzi and the young Pierre Kalulu. The former Roma man has the advantage over the Frenchman and could return to the field after more than a month following a partial injury to the medial meniscus of his left knee. It would be a chance for the Euro 2020 winner to showcase his ability, as he is fresher than Kalulu who has been away on France U21 duty.

The report claims that Stefano Pioli’s idea is to field Florenzi in the league and preserve Kalulu for the Champions League match against Atletico, which is a must-win game. With Kalulu on the field in the league Milan have not conceded a goal, and it would be nice for that to extend to Europe.