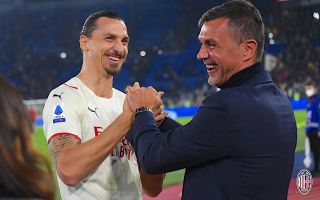 CM: Ibrahimovic has no plans to retire – latest on his future with agreement already in place

Zlatan Ibrahimovic does not have any plan to retire at the end of the season and has made the World Cup next winter his target, according to a report.

Ibrahimovic showed that he can still be decisive at the age of 40, scoring with a free-kick that clocked 101km/h to give the Rossoneri the lead against Roma last night and then drawing the penalty that resulted in the second and ultimately the match-winning goal.

Calciomercato.com recalls how Ibrahimovic’s contract expires at the end of the season and he is now listening to his body which has faced plenty of battles over the year. Nonetheless, in the Swede’s mind there is the desire to go on at least for another season with Milan and play at the World Cup in Qatar.

Paolo Maldini and Ricky Massara have received carte blanche for a renewal under the same conditions as the current agreement: €4m net fixed base plus bonuses linked to team targets plus individual appearances and goals. The ball then will pass to Zlatan.

READ MORE: Tonali reflects on ‘difficulties of last year’ and explains why Milan is ‘home’ for him