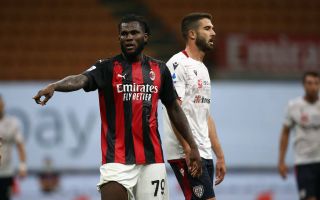 CM.it: Arsenal and Spurs show interest in Milan star but €40m bid may not be enough

North London duo Arsenal and Spurs are both interested in AC Milan midfielder Franck Kessie, a report claims, but it will be a difficult pursuit.

The Ivorian has become a true leader for Milan over the last few months, forming a fearsome double pivot in midfield alongside Ismael Bennacer and reaching a level of consistency with his performances that has not been seen yet in his career.

In fact, today’s edition of La Gazzetta dello Sport (via MilanLive) reports that Milan are taking steps to secure the renewal of Kessie, whose current contract is set to expire in June 2022.

According to Calciomercato.it, Kessie is highly regarded in England, with Arsenal and Spurs believing he has the perfect characteristics for the Premier League.

Despite this, the feeling is that Milan would not sell such a key player unless a bid of €40-50million were tabled, while the report confirms that the Rossoneri management do intend to extend his contract with the player happy to stay.