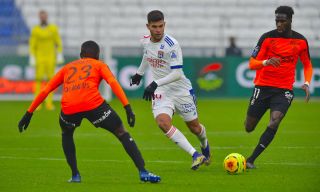 CM.it: Milan and Inter left with regret as value of Lyon midfielder doubles to €33m+

AC Milan and Inter both have some regret about not having signed Lyon midfielder Bruno Guimares when they were offered him, a report claims.

According to Calciomercato.it, Guimares – who moved to the Ligue 1 club January 2020 for €20m from Athletico Paranaense – is now worth around €33-38m.

He has been linked with Inter over the past few days but they consider that figure to be too high, but the Nerazzurri and other Italian clubs had their chance.

The 23-year-old from Rio de Janeiro had been offered to Inter and Milan before his move to Lyon, but at the time both clubs considered the €14-15m asking price to be excessive. The player for his part would have been happy with a move to Italy, but things went differently.

A future in Serie A seems very difficult, at least in the immediate future, unless there are some surprises down the line. However, Atletico Madrid have shown an interest as have several English teams, with his agent Giuliano Bertolucci familiar with some top clubs.