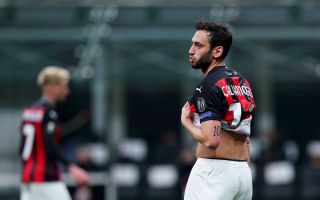 Hakan Calhanoglu remains keen on staying at AC Milan despite offers on the table from Manchester United and two Serie A clubs, a report claims.

As each week passes the Calhanoglu renewal issue falls under further scrutiny, as the 27-year-old is seemingly no closer to renewing his current contract which is set to expire in June, meaning he will soon be free to sign with another team on a free transfer.

According to the latest from Calciomercato.it, Milan continue to offer €3.5m net per year to the Turkey international, a salary which is about €300k higher than the current one. Calhanoglu’s request, on the other hand, is around €4.5m with some effort needed from both sides to find an agreement.

In recent months the former Leverkusen player has received offers from Napoli, another Serie A club and also from Manchester United. They are described as ‘temptations’ that – at the moment – have not made the No.10 change his mind. Instead, his will remains to continue with Milan and new contacts are expected between the parties to try to reach an agreement.