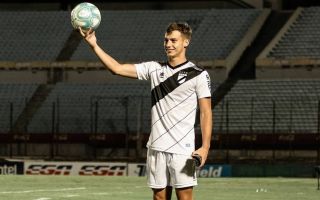 AC Milan are considering the possibility of signing teenage striker Nicolas Siri having been offered him for a bargain fee, a report claims.

Calciomercato.it have broken the news that Siri – the player who broke a record that Pele set – is of interest to the Rossoneri management. The Milan leadership are always very attentive to the possibility of bringing in young talent to bolster an academy system that has fallen by the wayside somewhat in recent years, and the club have been offered the chance to sign Siri.

Not only that, but they have learned in the discussions that he could be signed for €1.5m including commissions, plus possibly a percentage of future resale in favour of his current side Danubio. The 17-year-old will soon be able to obtain a European passport too, which certainly boosts his chances.

A youth academy graduate of Danubio, Siri made his professional debut in September 2020 against Boston River and in March 2021 he scored a hat-trick in 5–1 league win against the same team. This made him the second-youngest player in history to score a hat-trick in professional football, only behind Trevor Francis.

He also became the youngest South American to score a hat-trick in, a record which was taken by Diego Maradona in 1977 and was held by Pelé prior to that.