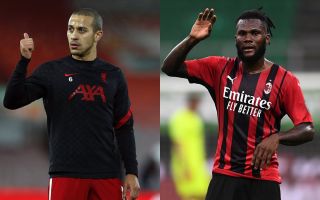 Franck Kessie is yet to renew his contract with AC Milan and inevitably, several big clubs are monitoring his situation with great interest. Liverpool are one of them and are ready to offer a player in exchange, a report claims.

After his words at the Olympics, many expected Kessie to renew shortly after his return to Italy. However, that never happened and Milan are seemingly struggling to get his signature for the new deal, making a departure possible.

According to Calciomercato.com, in addition to Paris Saint-Germain and Tottenham, Liverpool are also interested in the former Atalanta man. In fact, they are ready to offer Thiago Alcantara in exchange to secure Kessie in January.

Obviously, Milan are hoping that they can reach an agreement for the contract renewal before that, thus avoiding the need to evaluate a sale come January. With that said, the aforementioned deal would certainly be interesting.