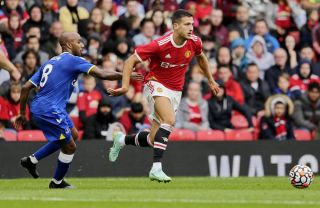 CM: Man Utd defender impresses in friendly but wants Milan move – the stance of both clubs

AC Milan want to secure the return of Diogo Dalot but may have to wait until the final days of the summer window, according to a report.

Dalot put in a good performance during the friendly match between Manchester United and Everton yesterday, in which he scored the final goal, while he remains in the sights of Milan. Calciomercato.com writes that Maldini and Massara are monitoring the situation but do not want to force their hand too much, hoping to eventually secure a loan with option to buy deal.

Contacts with the Red Devils are frequent, but United would like to monetise from the sale of Dalot as things stand at the moment and his excellent performance could also convince Ole Gunnar Solskjaer to bet on the Portugal international.

For his part, the 22-year-old would very gladly return to Milan, where he has been able to establish himself and where he has a great relationship with the coach, so the last few days of August will be decisive in this regard.