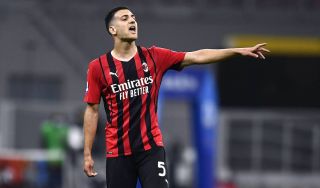 Diogo Dalot wishes to remain at AC Milan beyond the end of his current loan spell, according to a report.

Dalot was shipped out on loan to Milan by Manchester United last summer on a season-long dry loan, and with the end of the season approaching it is time to resolve the defender’s future. While Dalot has struggled for consistent starts in Serie A, he has found plenty of playing time and this has led to suggestions that Milan could look to keep him.

As Calciomercato.com writes, Dalot was one of the few players to save himself in the bad performance by Milan against Cagliari on Sunday night, as the Rossoneri threw away the chance to secure top four by drawing 0-0. The Portuguese full-back has grown in recent matches and would like to stay with the Rossoneri next season too, but everything will depend on Manchester United’s will as per the report.