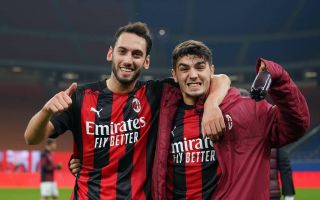 The negotiation for the extension of Hakan Calhanoglu’s contract with AC Milan is beginning to resemble a chess game, a report claims.

In our exclusive interview with Christian Falk, the Bild journalist revealed that there is a ‘90% chance’ that Calhanoglu joins Man Utd on a free transfer.

Daniele Longo has given an update on the situation in his latest for Calciomercato.com and uses the analogy of how the challengers are studying each other for a long time, just waiting for a strategic and decisive move.

Calhanoglu is evaluating with his agent the possibility of lowering the initial request of €6m net per season in order to try and find an agreement with Milan. The operation continues under the radar, but some signs have arrived in the last few days namely from the Turkish national team, where the No.10 has apparently told his team-mates he expects to stay at Milan.

Sources close to the club meanwhile reiterate that the proposal made to Calhanoglu’s agent is the result of careful evaluations and considered the best possible offer in relation to the value of the player and the current moment the world of football is going through with regards to economic crisis.

The figure is around €3.5-4m and there are no major exceptions as happened a few months ago with Ibrahimovic, and in the next 15-20 days Calhanoglu’s entourage will arrive in Italy for a meeting with Massara and Maldini.

It could well be a decisive meeting to understand whether to go on together or not, but the percentages of an agreement being compared to a few weeks ago are on the rise.