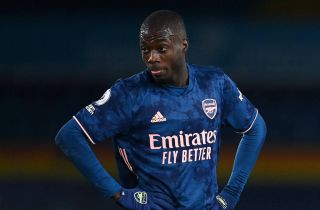 The idea that AC Milan could launch a January move for Arsenal winger Nicolas Pepe has been downplayed by the latest reports.

Spanish outlet TF reported yesterday how the Ivorian has not managed to adapt well at Arsenal despite the €80m they paid Lille to sign him, and Mikel Arteta has told their management that they can find a new destination for him after his silly red card against Leeds.

The big clubs in Europe are monitoring the situation, and MilanLive added that Milan are a ‘serious candidate’ for various reasons, such as the possible sale of Samu Castillejo to generate funds, Rafael Leao’s friendship with the player and Ivan Gazidis’ links to Arsenal.

Milan could aim for a loan with option to buy at a figure lower than the €50-60m Arsenal would likely request, they suggested.

According to the latest from Calciomercato.com however, Pepe is a player that the Rossoneri management admire but it does not go beyond a simple admiration for now.

The costs of a possible operation would be too high for Milan at the moment, so they are evaluating other priorities for the time being.