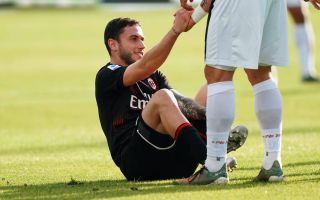 CM: Milan and Calabria fail to find meeting point on salary and length of renewal – the latest

AC Milan and Davide Calabria have not reached an agreement over his renewal despite recent talks, according to a report.

Calciomercato.com writes that Calabria – who has a contract expiring in 2022 – is a player that the club intends to secure for the future after an excellent bounce-back. The negotiations over an extension have been going on for some time and on Thursday there was a new meeting between the player’s entourage and directors Paolo Maldini and Ricky Massara at Casa Milan.

The offer from Milan is a five-year deal at €2m per season and for the moment it has not moved from these parameters. The player’s request is higher and at the moment there is not even an agreement even on the duration of the contract.

The issue is not necessarily about money and his attachment to Milan cannot be questioned, but the request is more regarding what is received by his team-mates. In about ten days the parties will have a new meeting, looking for an agreement that has not yet been reached.