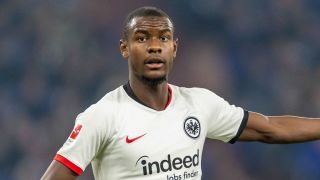 CM: Milan believe they have edge over Arsenal, Liverpool in race for €25m Eintracht star

AC Milan are confident they can beat competition from Arsenal and Liverpool in the race to sign an Eintracht Frankfurt star, a report claims.

It was reported by Sky Sports in the UK last month that both Milan clubs as well as Arsenal, Liverpool, Sevilla and Valencia are all interested in the France U21 international.

Calciomercato.com‘s Daniele Longo then confirmed the interest of the aforementioned clubs apart from Inter, and added that Milan scouts have been impressed by N’Dicka but will now have to decide whether to invest a sum close to the €25million that is being requested by the Bundesliga side.

According to the latest from Calciomercato, Milan are hopeful that their good relationship with Eintracht Frankfurt can help them win the race.

The two clubs of course did business in the summer as striker Andre Silva moved to Germany with winger Ante Rebic coming the other way in a swap of two-year loans.

N’Dicka has made 14 starts and one substitute appearance in the Bundesliga for Frankfurt so far in the current campaign.