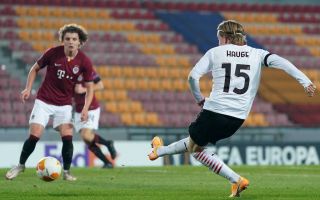 Jens Petter Hauge’s experience at AC Milan could end after just one season with Eintracht Frankfurt set to make a new bid, a report claims.

Calciomercato.com writes how the first half of last season seemed like the perfect script for the Norwegian, as the young talent came from a very small city in his home country and managed to establish himself at one of the most important clubs in the world.

The second half of the season was not quite the same though as he found his playing time decrease under Stefano Pioli and he now seems destined to say goodbye after less than a year. Milan could sell Hauge but they don’t want to do so at an amount below their valuation.

Hauge has interest in both the Bundesliga and the Premier League, with Eintracht Frankfurt the team who have made most concrete steps by making an offer of €8m fixed plus bonuses. Milan rejected this offer as they want €15m, but that amount could go down to €12-13m, but not one euro less.

A new bid is expected from Eintracht in the next few days, who will have to move closer to the Rossoneri’s demands if they want to sign the winger.