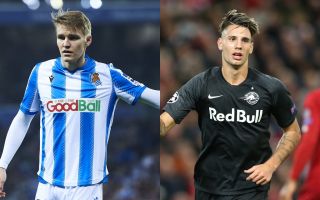 AC Milan are looking ahead with clear ideas for the summer window, set to start the youth revolution with Ralf Rangnick in charge. Therefore, there will be many changes to the squad in the coming months.

As reported by Calciomercato.com, it’s no coincidence that the Rossoneri have started to look at redundancies at Real Madrid, aiming to sign talented players. The latest name to be linked with them is Martin Odegaard, currently on loan at Real Sociedad.

An axis between Milan and Real can be re-ignited after the Theo Hernandez operation last summer. In fact, the Norweigan midfielder was even discussed by the clubs back then, but they couldn’t reach an agreement on the figures.

Sociedad have made it known that they want to keep Odegaard for one more year, using the clause in the contract. The Bernabeu side, meanwhile, haven’t made a final decision yet which could favour the Rossoneri.

As of today, though, Milan have other priorities as Dominik Szoboszlai remains at the top of their list. The RB Salzburg man is the ideal profile to reinforce the midfield, but the competition is fierce and thus alternatives are being evaluated.

READ MORE: Rangnick ready to start his Milan adventure – the wait is almost over